What Does It Mean to be a Good Sport? 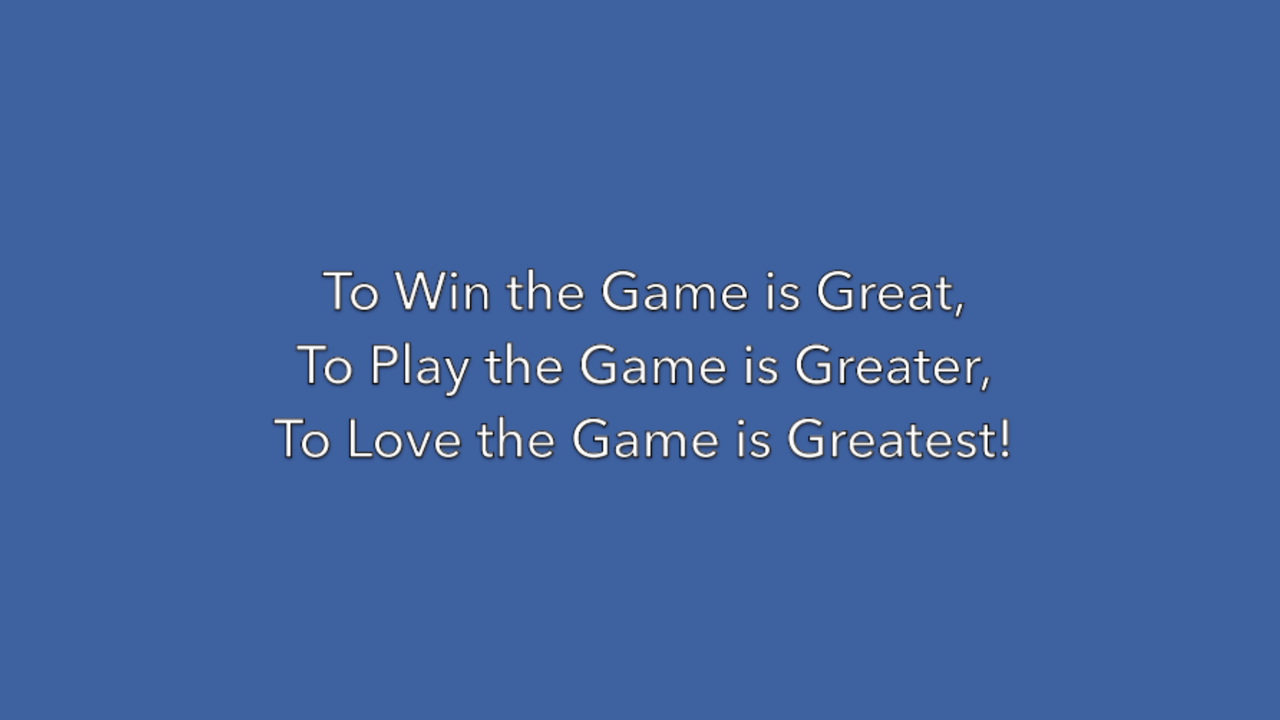 I have never known life without competition. My father was a tennis player and coached an NCAA Division I school for 32 years. My mother was an 11 time All-American in field hockey and lacrosse. Athletics ruled our household and for my parents, the line between parenting their children and coaching their children in a sport was blurry.

Competition could inspire any activity in our home. “Last one there is a rotten egg,” my mother would proclaim to get her dawdling children moving faster in the right direction.

“Toast up, I said it first” we’d yell, and grab for the toast that you didn’t really want, but then ate because you’d won the slice.

A simple plaque in the kitchen said all my parents believed about competition,

There were some very clear messages in our home.

1) We were not expected to “win,” but we were always expected to do our best. Whether on the field, court, or in the classroom, the expectation was that you would put forth maximum effort.

2) We were expected to persevere when discouraged. “I can’t” was not allowed -- whether it be in athletics or school work. We were reminded that even when it was tough, quitting was not an option. After all, a team member or family member was counting on you.

3) Excellence did not come without hard work. Practicing wasn’t always fun, but the results of hard-work were certainly extremely satisfying.

4) When discouraged, my parents were quick to point out how far you had come instead of how far you still had to go. Everything was compared to a journey, and the beginning and end were just brief moments in the experience.

The importance of our being "a good sport" not simply in competition but in all of life was mentioned frequently.

When I was five years old, my brother aged nine and my sister aged ten, my parents put the three of us in the family station wagon and drove us from Michigan to California to go to Disneyland. We were not 30 miles out of town before the first child said, “How much further?” to which my mother replied, “a long way, and you’re going to be a good sport about it, aren’t you?”

I don’t remember there ever being a penalty for not being a good sport. "Good sport" is a noun, and we were good sports, because mom said we were going to be. In fact, at the end of that trip, “You’re going to be a Good Sport about it, aren’t you!” became our new family mantra. Whether your sister had a piano recital or your brother a ball game, you were going to support them. If mom got a hint that someone was thinking of complaining, she would ask, “What kind of sport are you going to be?” and we knew to reply, “A GOOD one!”

We grew up competing and we knew what it meant to be a good sport. We shook our opponents' hands, congratulated them for good shots, and did not wish them any ill will. We never booed a referee, were not allowed to use gamesmanship, and applauded for both teams for a point well played or a good shot.

Being a good sport did not mean that we were devoid of disappointment. Competitors feel extreme disappointment when a goal is missed or game is lost. Disappointment is real and can take your breath away and bring tears to your eyes. However, we learned early to hide our disappointment so as not to steal the joy of an opponent’s victory. Disappointment had to be postponed for a more appropriate setting. A tough lesson for young children, and all too often, adults.

As the owner of the Dog Trainers Workshop, it is no accident that I refer to  employees as  "team members." Just like the family I grew up in, I expect both employees and owners to try our hardest, persevere, never say “I can’t,” and always support one another in our work and in our personal goals.

Furthermore, I expect employees to be a good sport when there are scheduling conflicts, changes in systems or procedures, or emergencies that require them to work harder and longer.

Running a business is an ongoing competition. It requires that we provide the best instruction to the dogs and our clients, give fabulous customer service, and continually strive to improve our systems and techniques. Most importantly, it requires immediate action when a mistake is made. Winning is not measured with ribbons and awards, but with satisfied customers, a great reputation, and continued growth.

Looking back on a 30-year career as a business owner, teacher, and coach, I specifically remember three compliments as the best I have ever received. Interestingly, they all involved being a good sport in the midst of perceived failure.

The first was following a performance with my Shih-tzu. Training her was a labor of love as she was not a good problem solver and never sure she wanted to share the stage with me. After one disheartening performance, a stranger approached me and said, “I just watched you and know that if you are willing to train and show her, I need you to help me with my dog!”

Another was from a student, who rather offhandedly said to me, “You know what I love about you? You’re not afraid to lose.”

The third was from a competitor, extremely frustrated with her own dog, who said, “I was going to quit, but I saw the difficulties that you are having and thought, 'If Connie’s not quitting, neither will I.'”

Many of us were involved in competition of some sort as youngsters, but are typically no longer actively competing as adults -- at least, not overtly in a public sport (I think all of us compete as adults in less public and obvious ways). I have spent my entire life competing in public sports, namely competition obedience and field trial championships. This public competition has been a way of life for me. Preparing dogs for competition offers a structure to life that I am completely comfortable with if not addicted to. It creates a cycle of setting goals, hard work, perseverance, changing plans when injury or difficulties cause set-backs, achieving a goal, and then setting another. It creates an environment where pursuing excellence is a way of life. As one dog retires, and I start with another, my desire is always to train the new one more effectively and efficiently. When plans don’t go as I have hoped, there is always the reminder to be a good sport.

This structure, though, can be applied to our less direct and less public forms of competition as well. Striving to meet a fitness goal, or conquer a health challenge? Working towards greater career advancement or a career change? Pursuing spiritual growth? Entering therapy to strengthen a marriage or resolve some old family injuries? Each of these things requires our very best effort, goal-setting, hard work and perseverance, flexibility when we experience setbacks, and the pursuit of excellence as a way of life. The beginning and the end of such rich journeys are mere brief moments in the experience and often transition points to new goals.

My father never did stop coaching. He lived with me the last six years of his life and as I left the house to teach or coach would call after me, “Show ‘em your enthusiastic leadership.” When I returned home following a disappointing performance, he would shrug and say, “You’ll get ‘em next time.” He truly loved the game of life.

It pains me to admit it, but there are times -- a few times -- when we aren't able to compete effectively, when we have to admit "I can't -- not any more." When we don't have a great attitude about a failure or a loss.

After she had decided to stop her cancer treatments and enter hospice care near the end of her life, my Mother said to me, “I’m not being a good sport about this.”

It was the only time she wasn’t a good sport. And truthfully, none of us were a good sport about it.

The ideal, however, was still present for her. And in a sense, it was her honest, frank acknowledgement of her "failure" -- as we all must "fail" some day -- that made her, as Rudyard Kipling said, a woman who