Meet "Pan" deMonium! My Thoughts on Raising a Performance Puppy 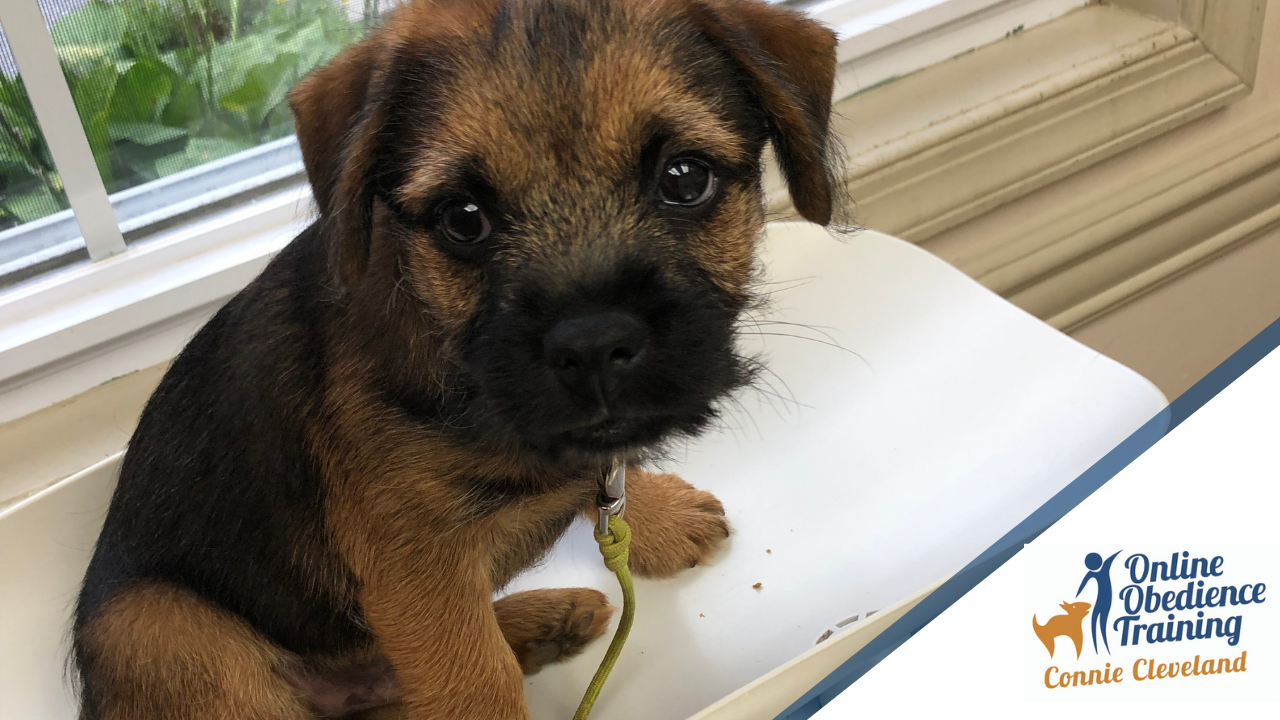 Meet "Pan" deMonium! He's a 7-week old Border Terrier that I've agreed to raise for a family member. Pan will be with me until he is 16-weeks-old. His owner has expressed an interest in exploring the world of obedience, agility, and possibly scent work, but most importantly, he's going to be her hiking and adventure buddy! I want to share his introduction to training with those skills in mind.

When I start training my puppies, I start with four subjects:

1) Luring- I want to teach my puppy to follow the food in my hand as I lure him into a variety of behaviors.

2) Indirect Path to Reward- I want my puppy to learn that sometimes he must move away from the treat to earn a treat.

3) Introducing and motivating a love for retrieving.

4) Learning to "Come" when called.

This first video is his second lesson after being separated from his littermates.

Of course, we can't ignore the basics of puppy raising for the excitement of the prospect of our new competitor:

Housebreaking
I had the pleasure of taking care of Pan's litter (six puppies) the weekend that they turned 7-weeks. The litter had been raised with a litter box in their whelping pen, and all the puppies were doing their best to use the cedar filled box to eliminate, and sleeping in other parts of the pen.

When the litter left, I maintained the set-up for Pan. He had grown accustomed to the pen and litter box at my home, and at 7-weeks and 4.5 pounds, I did not feel compelled to completely change his environment. The housebreaking rules I follow are to take my puppy outside every time his activity changes. That is, when he wakes up, he goes out, stops playing, out again, however, I found that knowing he had access to his "bathroom," which was adjacent to the kitchen, when I got busy or distracted, proved to be an asset. It prevented all accidents on the floor, and is a technique I will consider using with all my puppies in the future. Furthermore, at 4-months, he will be living in a third floor apartment, and knowing how to use that litter box may prove useful to that transition as it may sometimes prove difficult to get him to the ground floor in a timely manner.

My puppies are not loose with my older dogs. The size differential is a recipe for injury, and my older dogs do not need to tolerate the annoying behavior of a puppy. That said, my puppies are confined to the room that I am in when they are awake. Because of Pan's small size, I did construct a second pen with litter box in my office so that he could be confined to a smaller space when I was busy working, but was still within my sight.

Crate Training
Recently, a friend called me to say he was worried about his puppy exhibiting "separation anxiety." He said his pup was doing a lot of complaining and crying when confined. I asked the puppy's age. His answer was 10-weeks.

Hold on! We must separate a puppy's unhappiness with being confined with a diagnosis of "separation anxiety." My puppies have to learn to accept confinement. It will not always be safe or convenient for my puppy to be underfoot. However, I hate the sound of an unhappy, crying puppy. So, I ease my puppy into this new skill as gently as possible.
First, when my puppy is tired and ready for a nap, I put them in a crate with comfortable bedding and soft toys. I put the crate next to me if I'm in my office, or in a quiet spot if I'm busy. At the first sound that the puppy is awake, I go to him and take him outside.

Next, the puppy is always in a crate when riding in the car. Fussing in the car is typically short lived as both of us realize that being loose is not an option, so the fussing does not elicit the desired response.

It can be difficult to get a puppy to sleep in his crate at night. Pan came with a backpack. His new owner is active, and wants to hike with him, but realizes that it will be some time before he is big enough to hike the distances she desires. My intention was to get him accustomed to the backpack, however, it proved to have another purpose. Placing him in the backpack next to me on the bed gave him an amazing sense of security and comfort. He would almost immediately fall asleep next to me, whereupon I would gently place the backpack on the floor and turn off the lights. Remarkably, Pan never woke me in the middle of the night. If he had, I would have taken him outside, and then returned him to his pack. For Pan, using the backpack was so smooth, and so quiet, I will try this technique again with my next puppy. 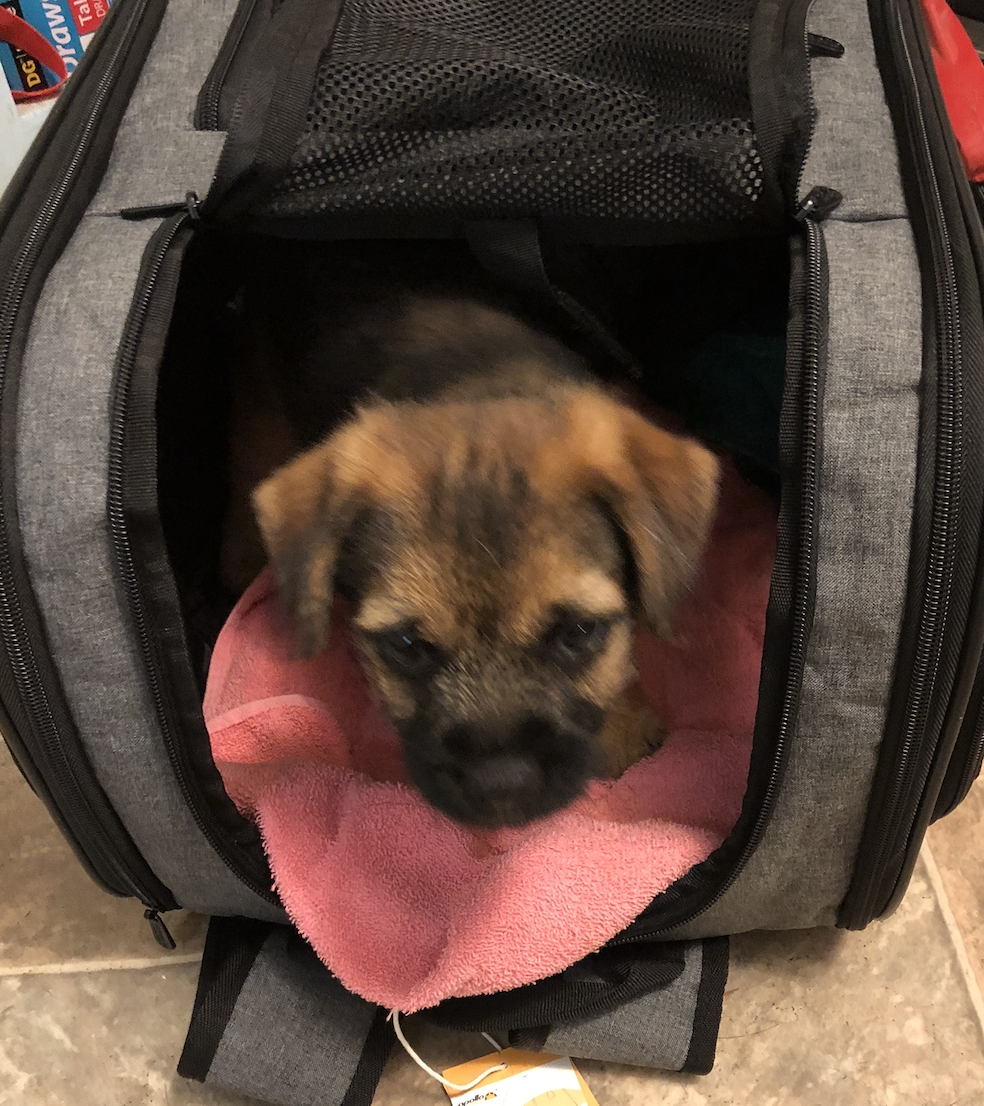 Pan in his backpack

It is important for me that Pan learns to be confined when he is not ready to sleep or in the car. However, I do not feel obligated to teach him that in the first two weeks. I have plenty of time for that.

This second video is within the first week of my bringing Pan home. He is not yet 8-weeks old.

What a difference a week makes! In the following video, Pan is 8 1/2 weeks-old. 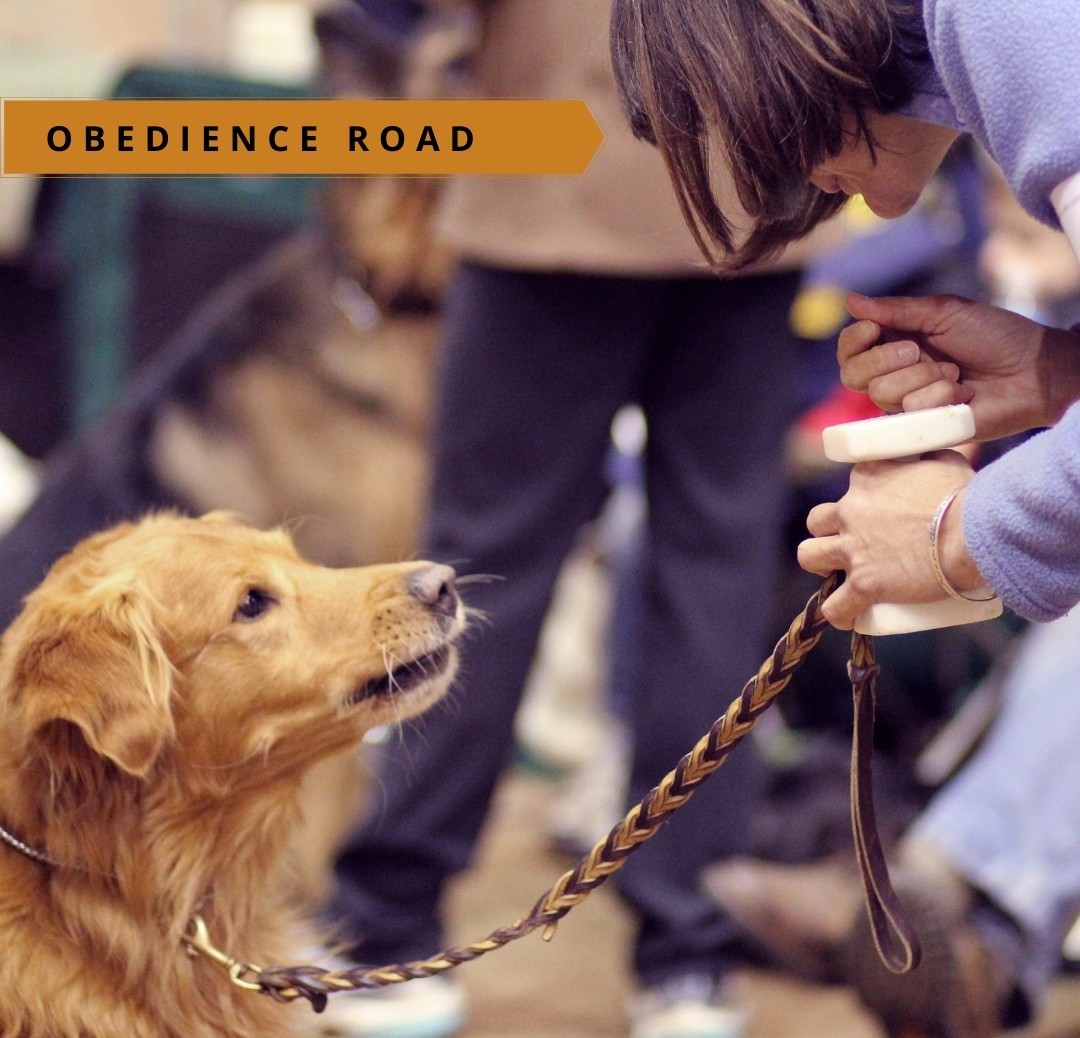